There are a number of ways one can acquire bees. To paraphrase Twelfth Night:

but be not afraid of bees: some are born to bees, some achieve bees, and some have bees thrust upon them.

Some people catch swarms. My great uncle Ronald had a hive thrust upon him. Although I’m the third generation of bee-keepers in my family, I wasn’t born to them (the previous two generations being predecessors but not ancestors). I went with the safer and easier option and obtained a nucleus from a local bee-keeper.

A nucleus (or ‘nuc’) is a small colony. It contains a queen, worker bees, brood and eggs that are her offspring, and the result of a spring’s worth of effort: combs full of honey and pollen stores. Colonies are in constant flux and have an annual cycle of growth and splitting. A nuc starts small and is delivered part-way through its development. It is housed in a small, approximately half-size hive and transported in a box. 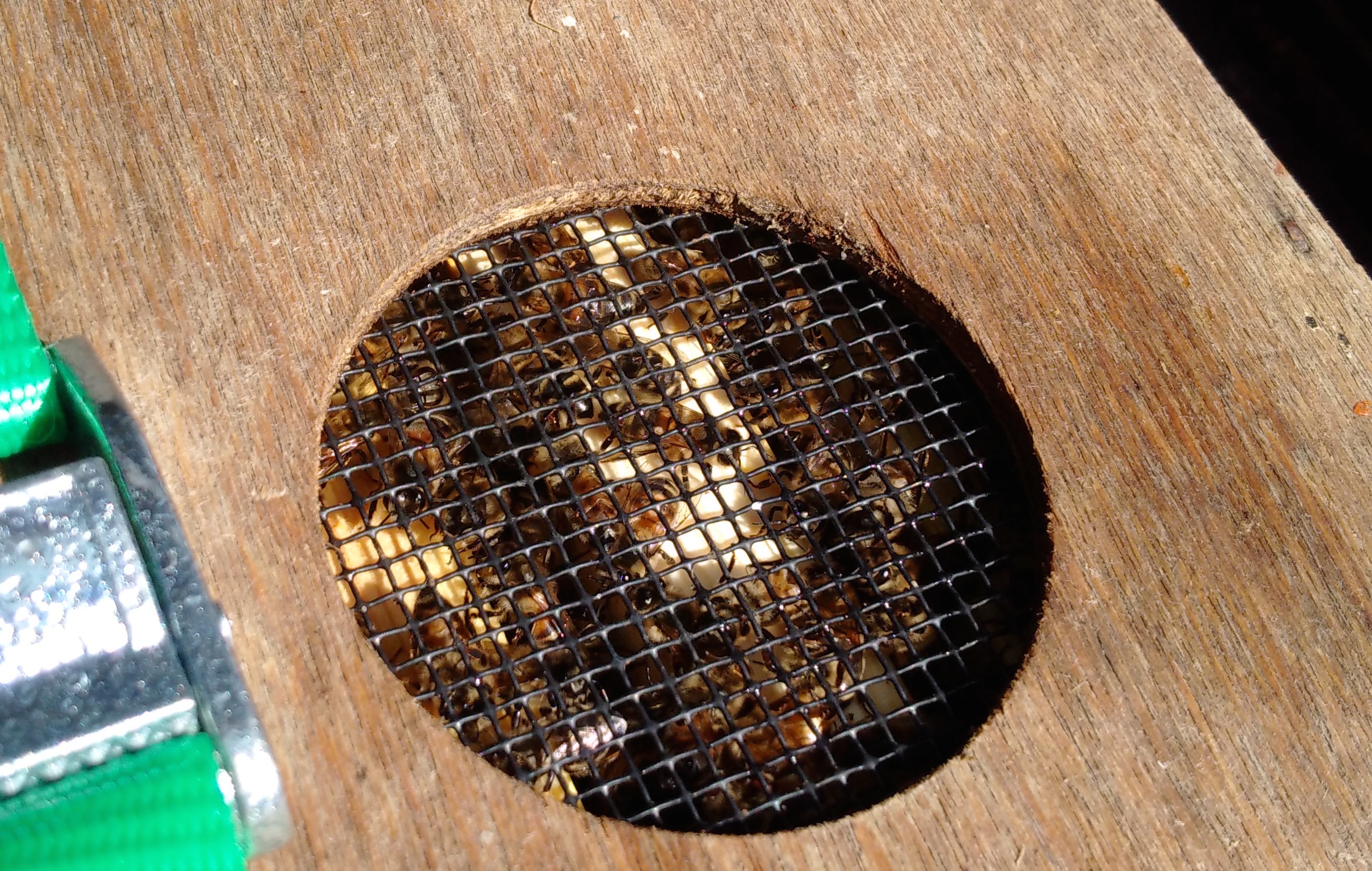 I bought my my nuc from Mark Lynch, who is a member of the local Oxfordshire Beekeepers Association. He’s also a tutor on the course run by the association.

A bee-hive contains about 11 frames in each box, and one, one-and-a-half or two boxes as brood boxes. The brood box(es) are where the queen has free reign to lay eggs and the workers can store whatever they want to store. A nucleus is about 6 frames, making it approximately half the size of a single brood box or a quarter of the total space that the bees might need when the colony is up to full size.

Mark arrived, we donned our bee-suits and he transferred the colony from the transport box into the brood box of my hive. A monumentally exciting occasion.

I’m experimenting with wearing a camera. Most of what we did was out of shot, but here are the best bits. With apologies for the shakiness.

The move must be quite a traumatic experience for the colony. They are taken out of their hive, put in a box, driven in a car and them moved into a new home. Of course they put up with much worse but still it must be a strain. 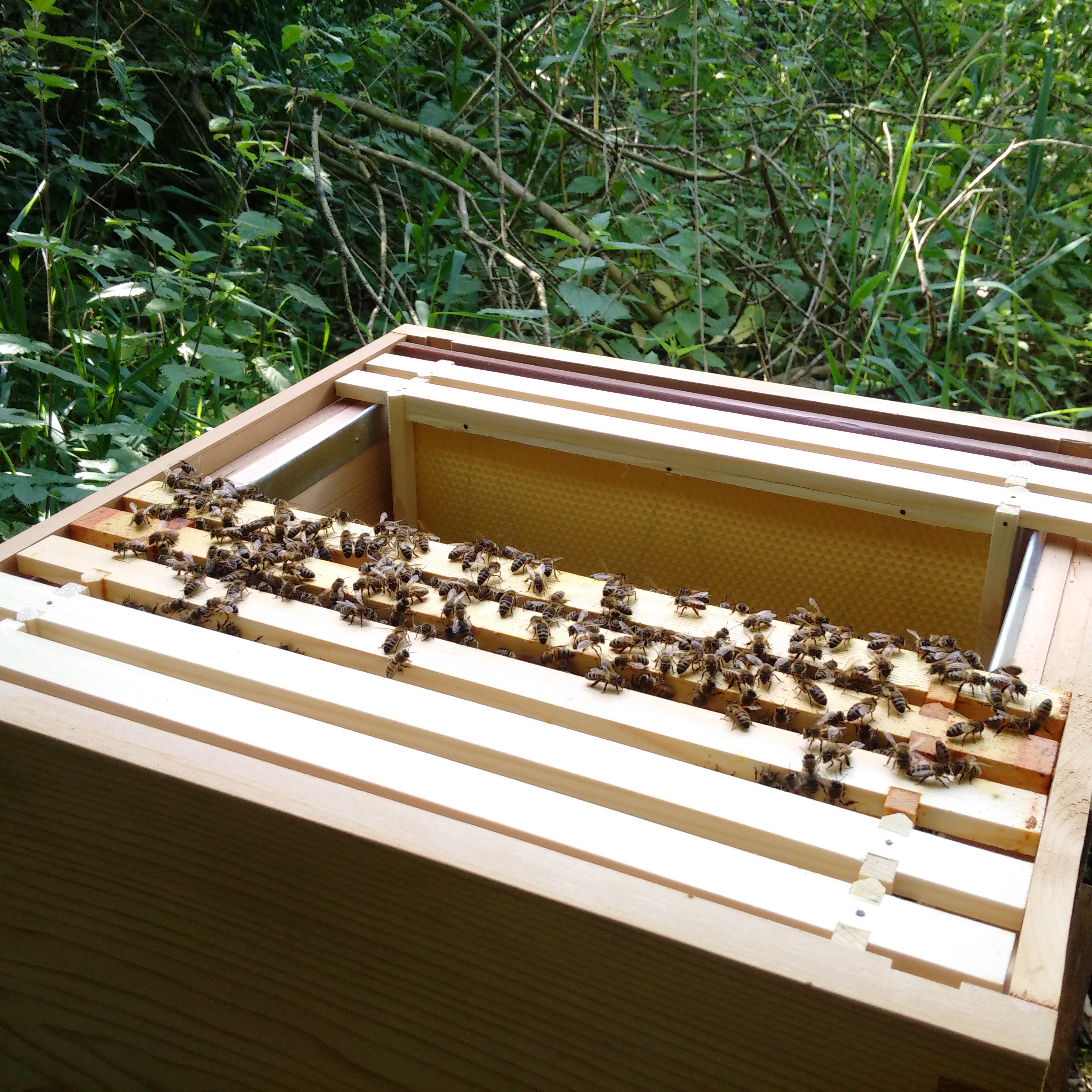 But they have much hard work ahead of them: settling into their new home, working out their new surroundings and building out an extra five-ish combs with wax. Making wax takes a surprising amount of energy: I read somewhere that I can take two units of honey to make one unit of beeswax.

So, I am feeding the bees. They still need their vitamins, minerals and protein, and that comes from pollen (and no-one’s stopping them foraging for nectar).

What are you feeding them?

Nectar is sugar (sucrose, glucose and fructose) syrup with the fragrance of flowers. Bees take it home and store it in comb. They evaporate off the water, invert sugars and it becomes honey. In the normal run of things all the nectar comes from flowers. The keeper of a hive near mine assures me that the honey from the local wildflowers is plentiful and delicious and the bees very fond of it. I have seen the bees at it, having a whale of a time, myself.

But a nucleus isn’t in the normal run of things, it has a lot of demands on it and a lot of catching up to do, and appreciates the help. 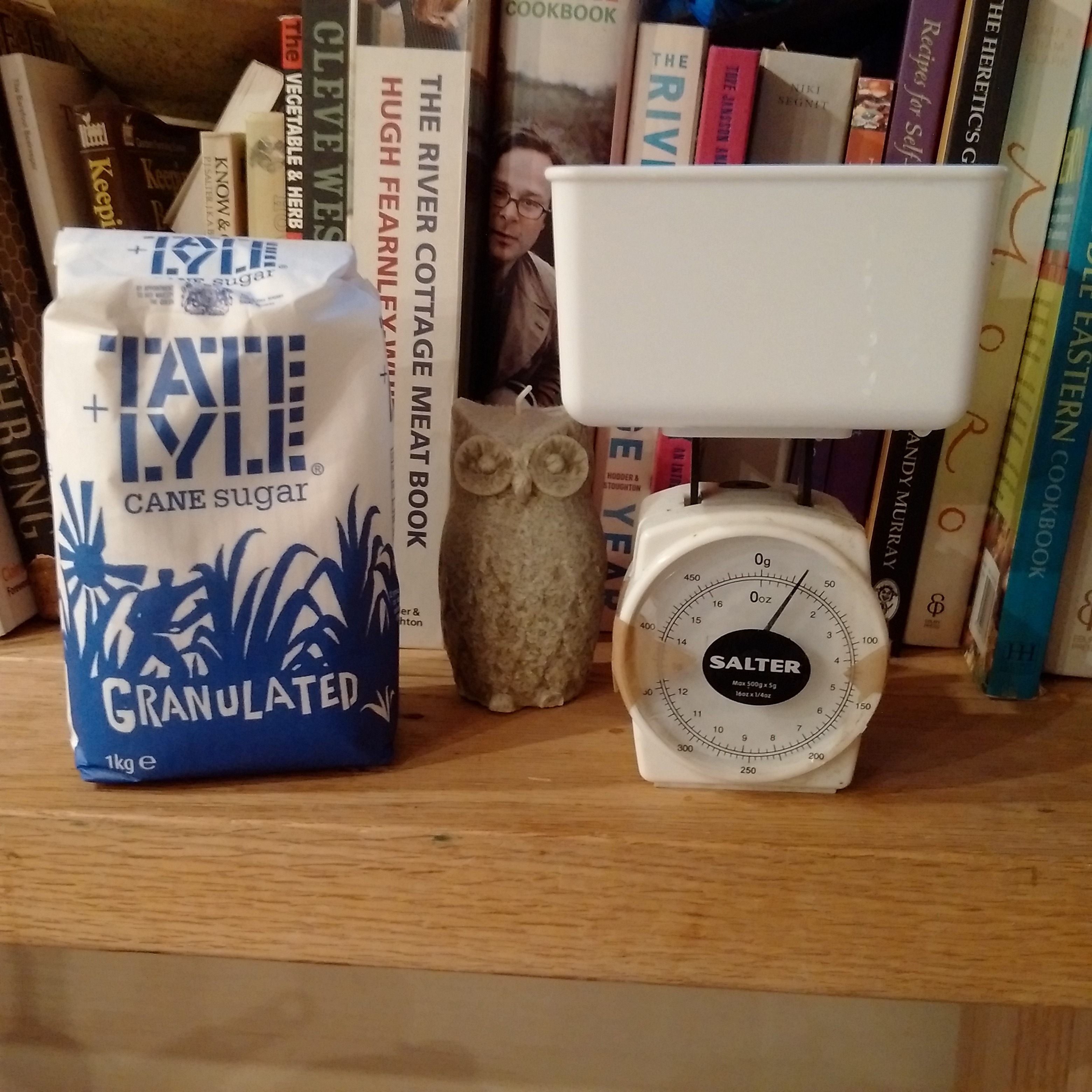 I mixed a whole kilo of sugar with about 600 grammes of water. Surprisingly, it all went in. 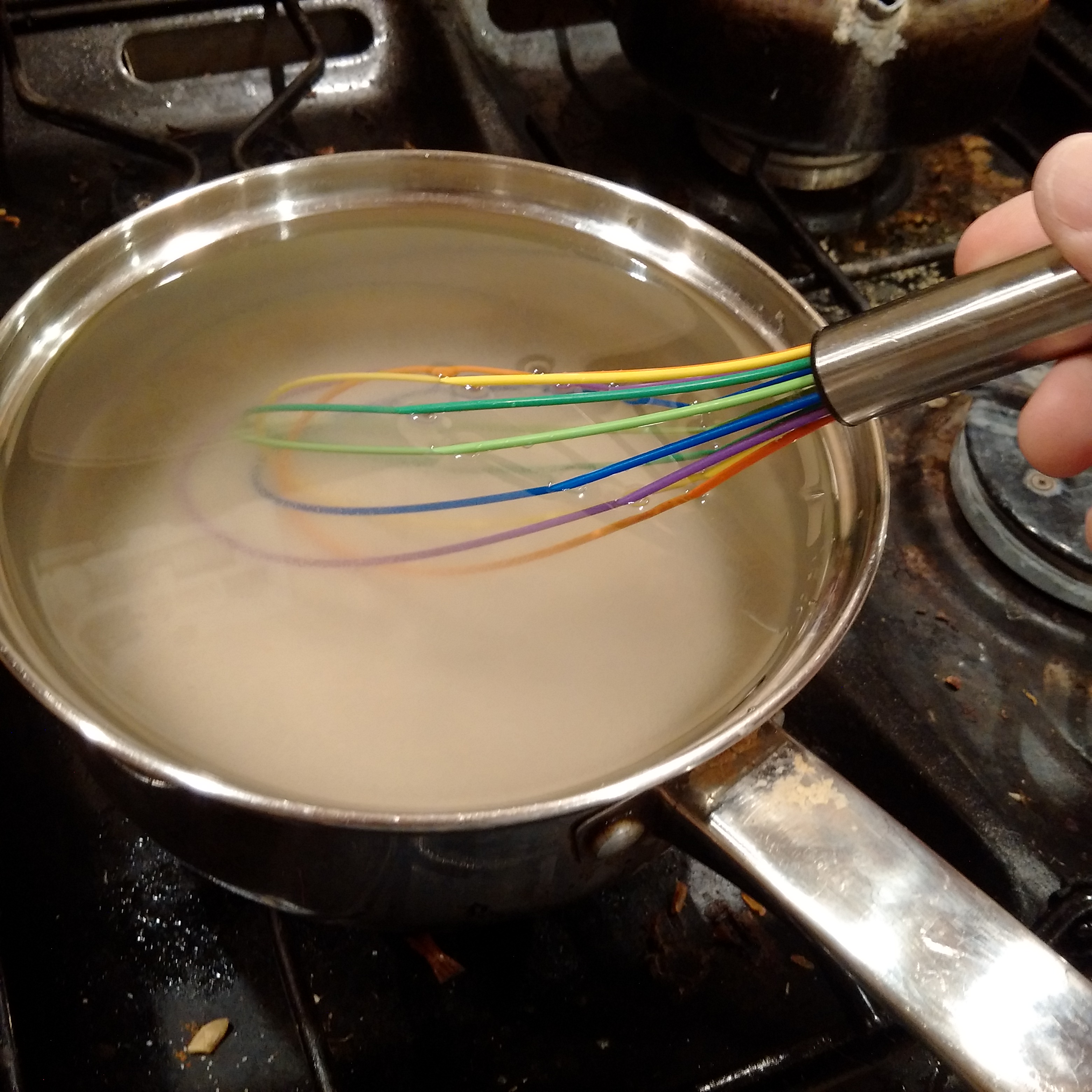 I started with a bottle with some holes cut in the top. They seem to be happy to stick their tongues in the holes to get out the syrup. 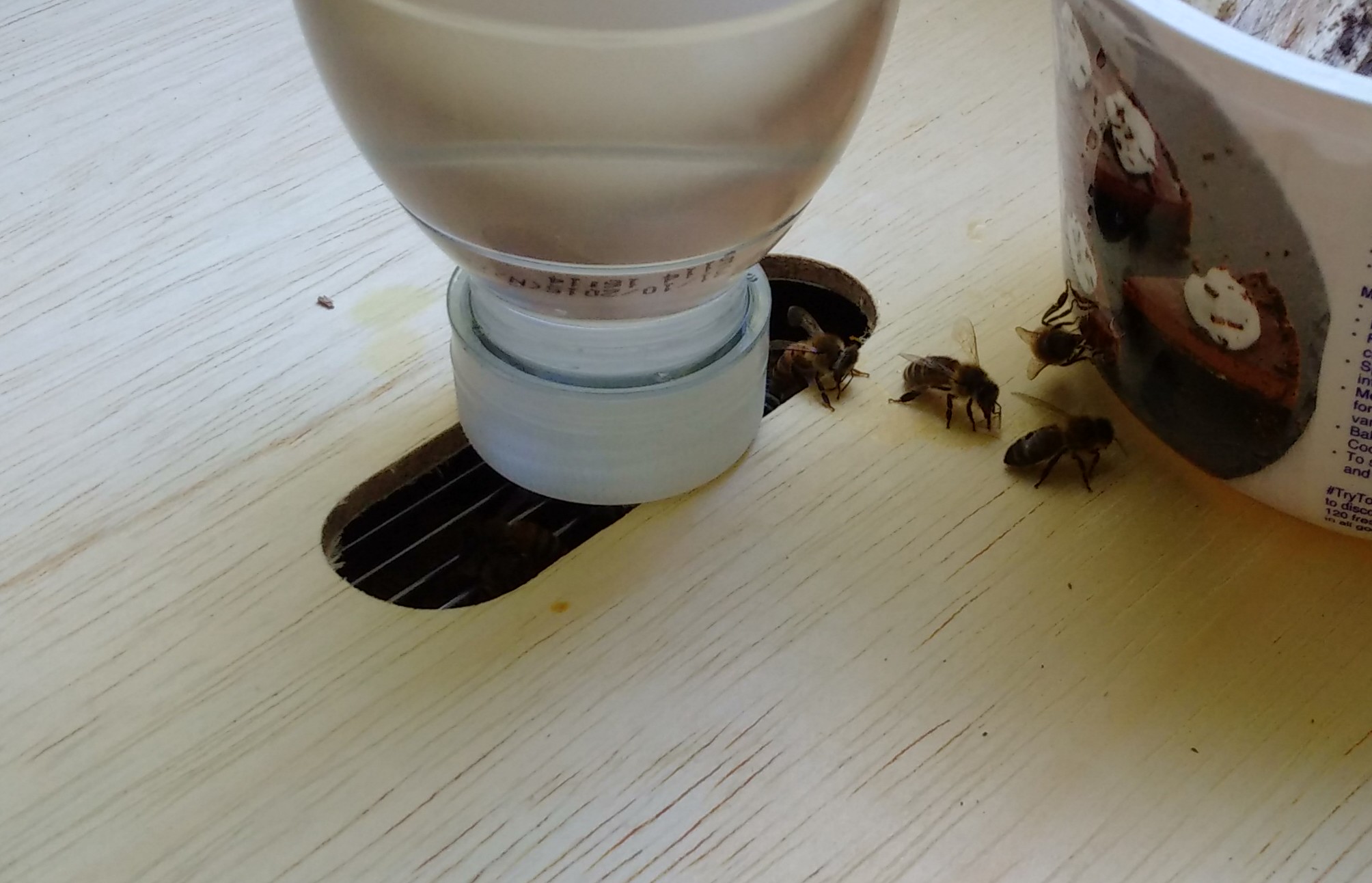 The bottle was only a stop-gap, and only a couple of bees could feed at the same time. I now have a proper feeder from which large numbers can feed.

The honey that this will make won’t be very nice to our first-world palate, but the bees will appreciate it. I’m not planning on taking any honey in the first year anyway. It’s not done.

Frankly, after the nucleus was installed, everything was a mess. There were bees everywhere. Eventually they worked out who was where, and with their Nasomov glands and insect communication they got everyone home. I thought I’d give them some privacy.

I came back after a few hours. There were bees at the entrance! Probably guard bees, counting everyone in and out and checking ID. 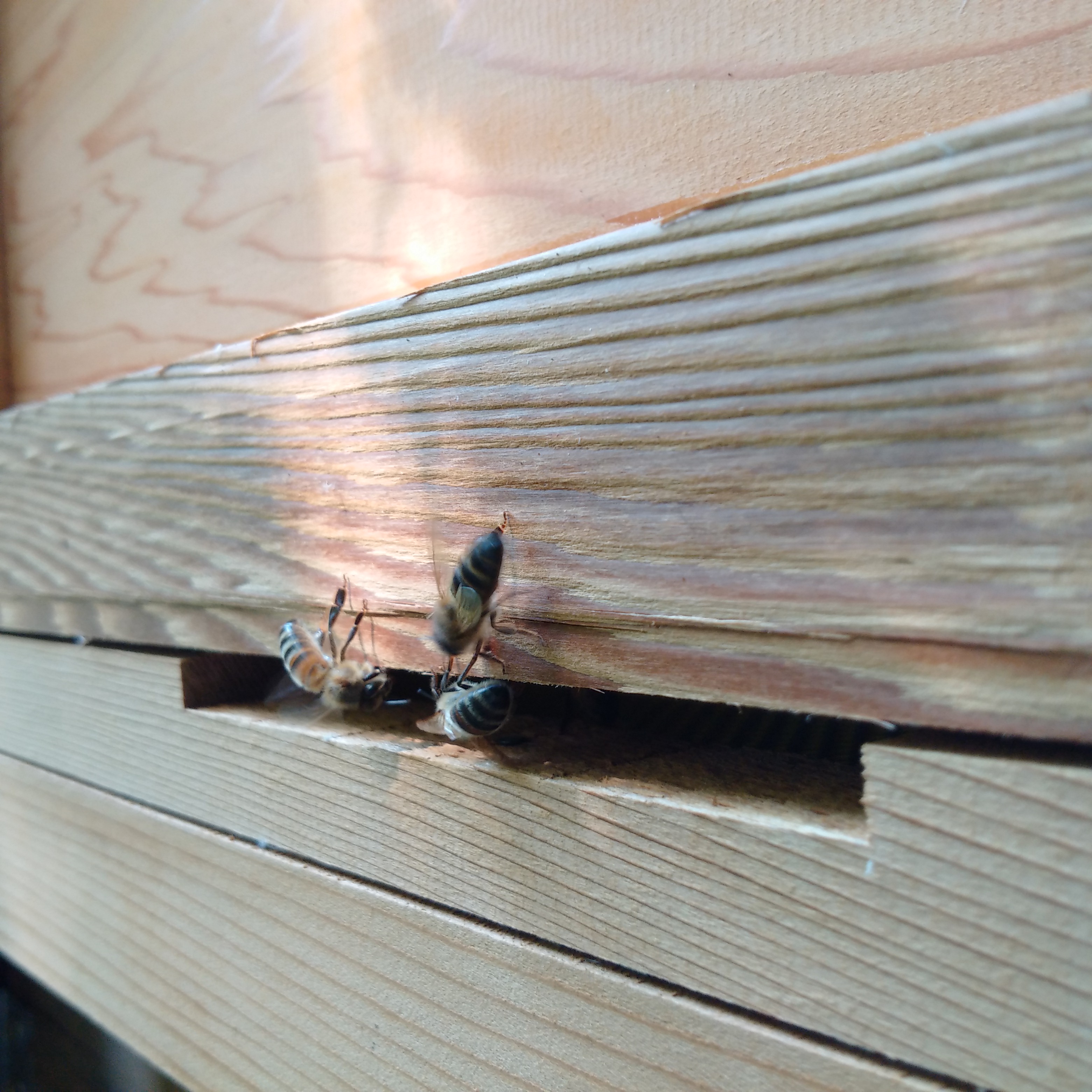 There were secret trysts, conversations and arrangements. 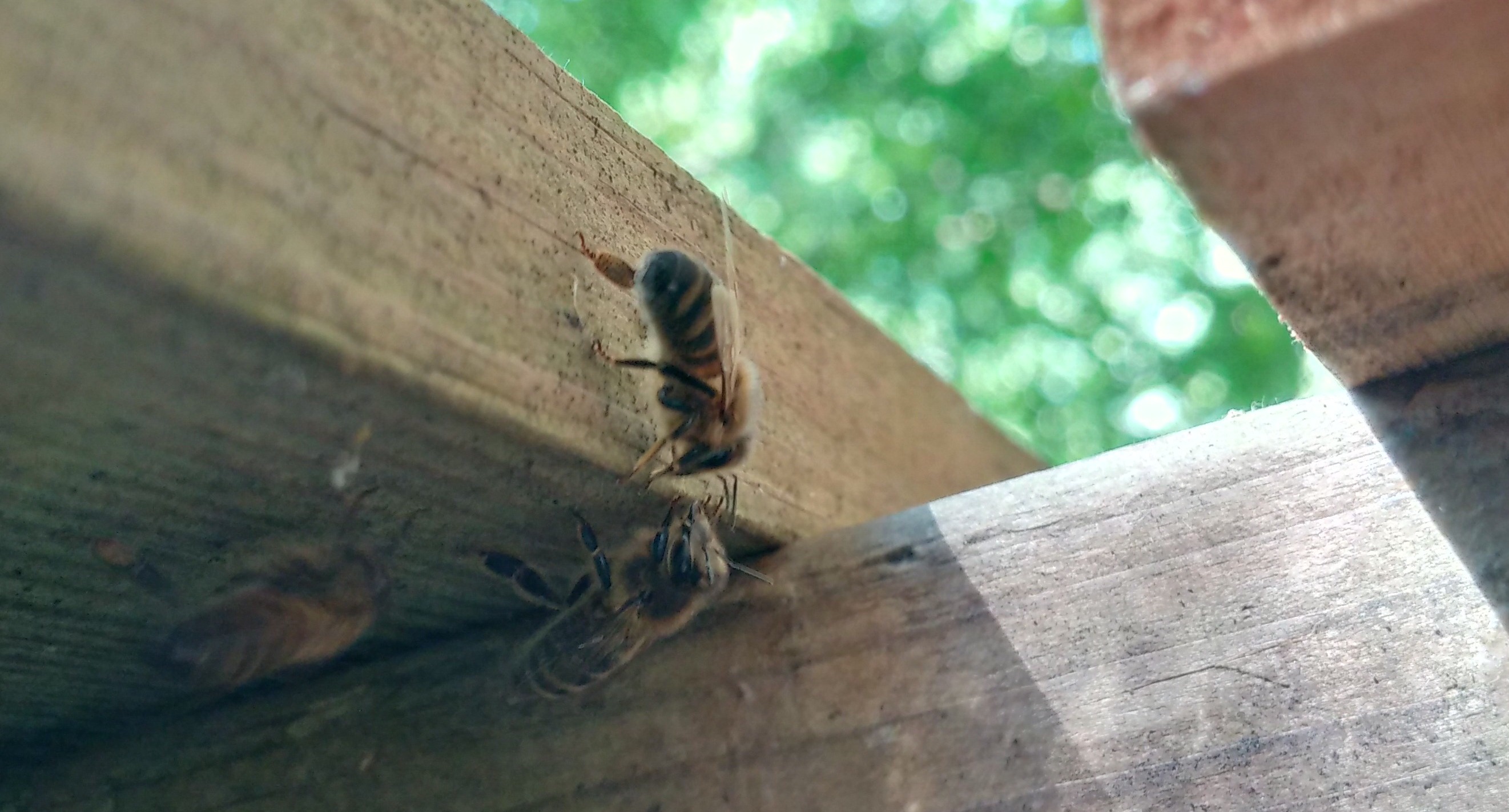 There were comings and goings. There was activity.

Bees coming back with frankly outrageous pollen baskets. A little thin-on-the-ground, but doing what they were put on this earth to do.

When bees leave the hive for the first time, they come out a little distance and look at the hive. They go a bit further and look. Further still. They don’t stop pausing to look until they’re happy that they could find their way back, and would know their hive apart from another one.

The fact that my bees were zipping off and coming back with pollen means that the foragers have done this, and know their way home.

In other words, me bees have settled in. 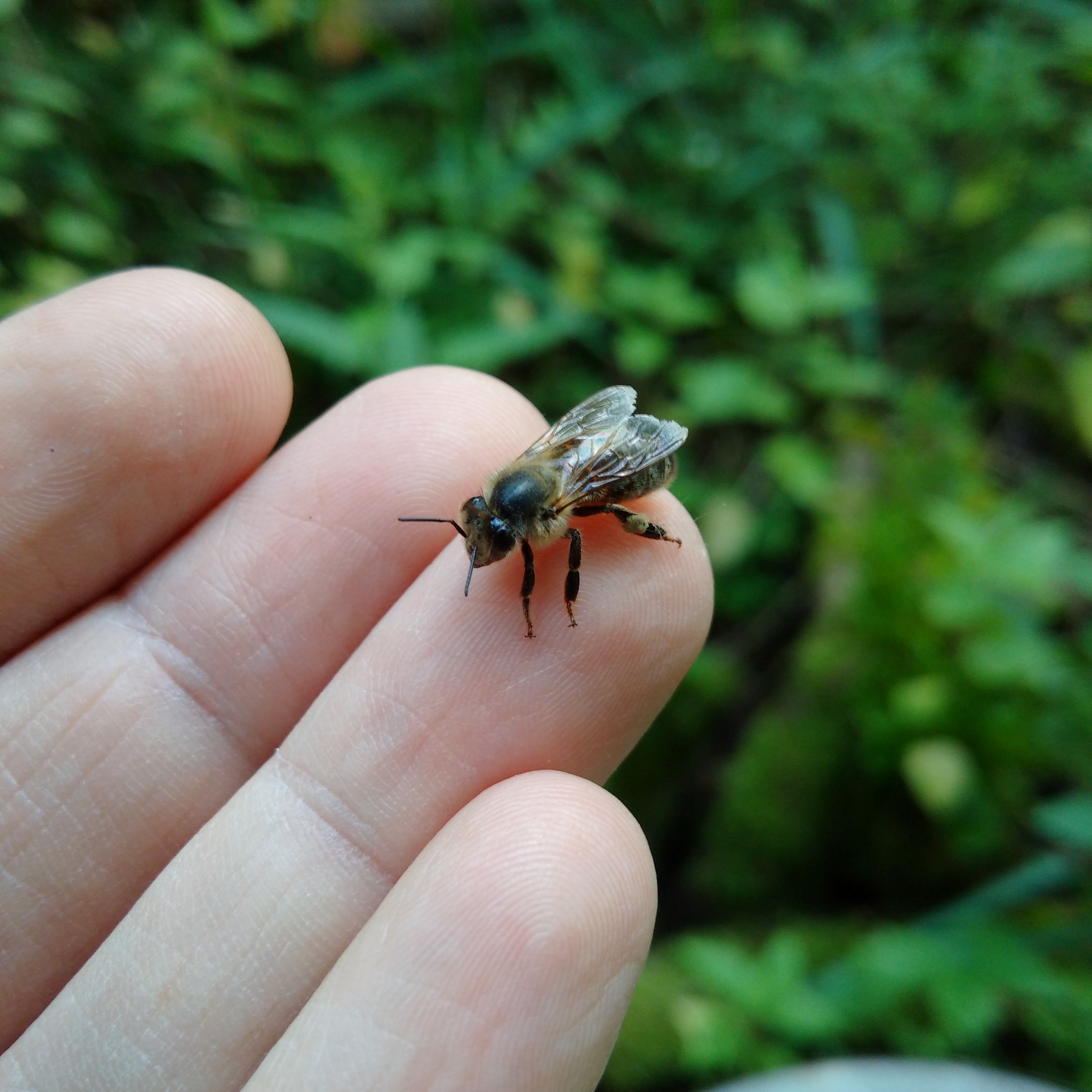 Read more about my bees.