A decade of Folk Tune Finder, an open manifesto for the decade to come

Today marks the release of the Digital Folk report, a study into the way that folk music is being played and shared in the digital age. The report opens with a timeline of some of the tools available and their history. It reminded me that Folk Tune Finder is ten years old this year - the folktunefinder.com domain was registered at half past nine in the morning on the 27th of January 2008. This seems like a good time to look back at the last decade and think about the future.

Folk Tune Finder started as my undergraduate project and dissertation in 2008. I had stumbled into the legendary Half Moon in Oxford shortly before, and heard folk music for the first time. I spent many happy Sunday nights in the Irish session, and much of them wondering what that tune was. 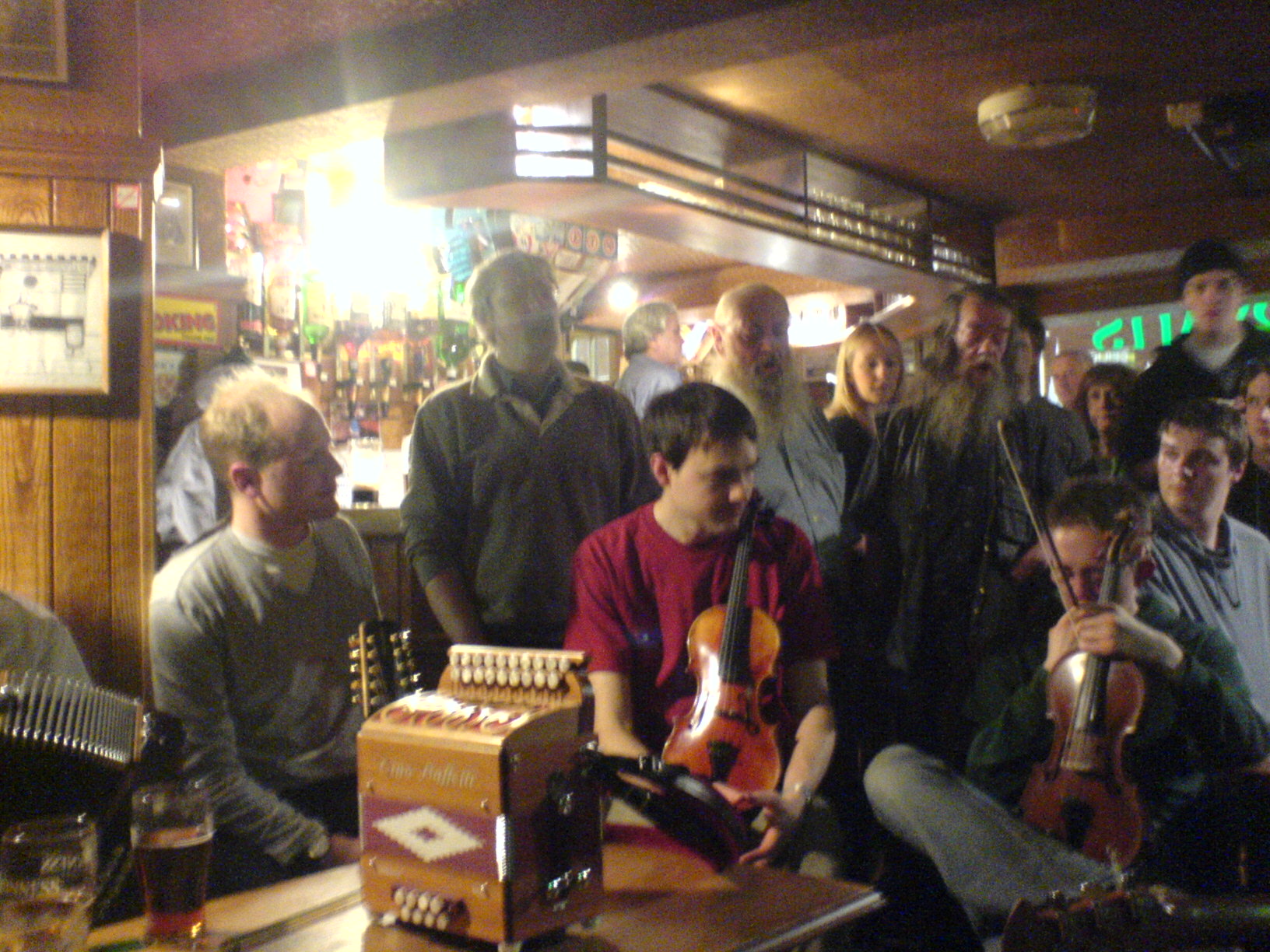 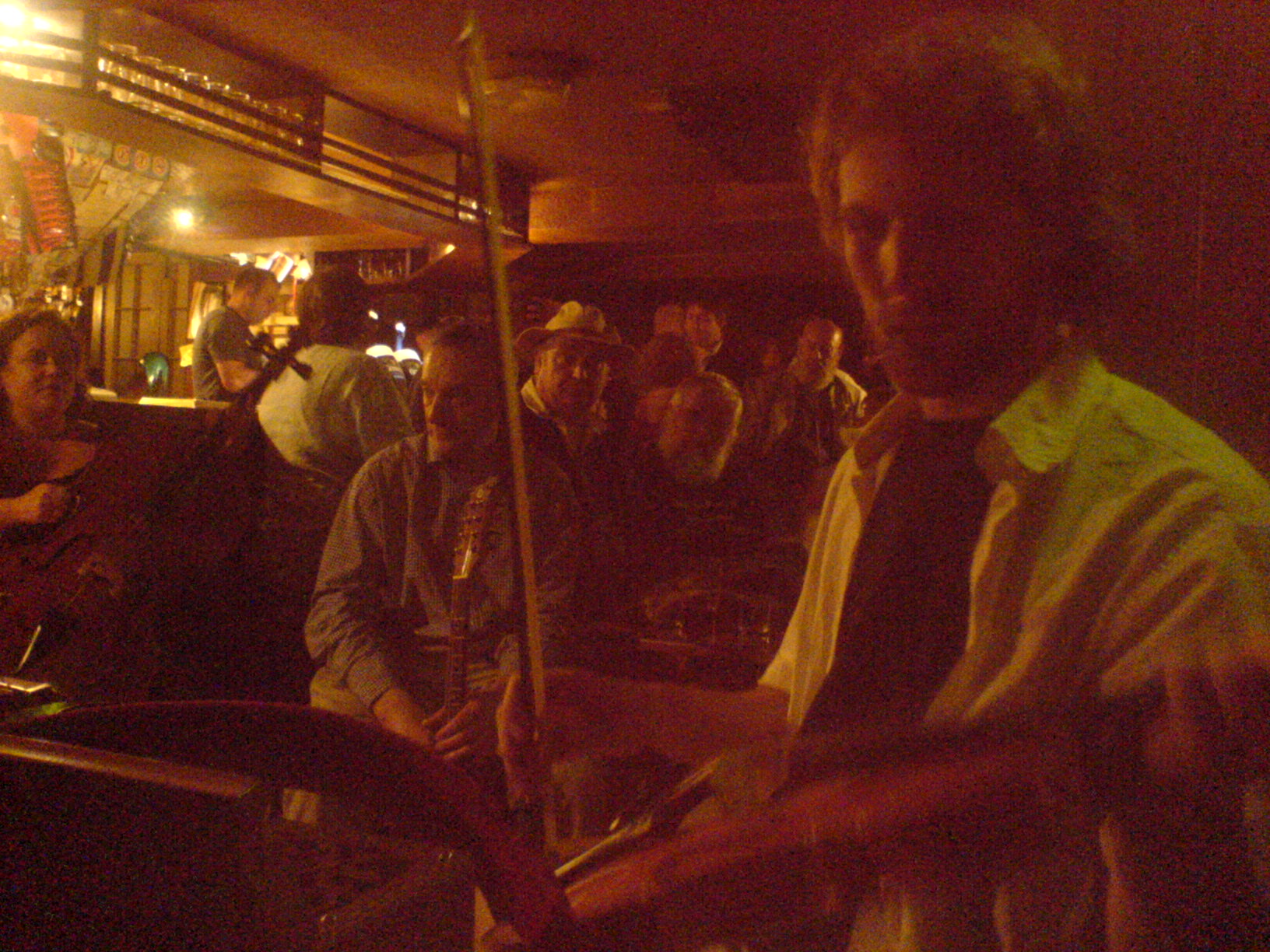 I had the idea of building a folk music search engine to try and help me solve this problem. I’d never heard of ABC (then again I hadn’t heard of slängpolska either), but I soon stumbled across The Session, and ABC, and my eyes were opened.

The melodic index for the first version of Folk Tune Finder ran on a cluster of XServe servers and took a couple of hours to compile. It was overkill, but a great opportunity to use some exciting hardware. I built my search engine, handed my dissertation in, got my grade. But it’s always been a fascination and an important part of my life. Over the years I’ve used it to explore new programming languages and technologies (if you’re keeping count, the tangled timeline of technologies goes something like Java, PHP, MySQL, Ruby, C, Python, PostScript(!), Scala, Redis, Go, JS, CoffeeScript, Clojure, Java again, Rust). 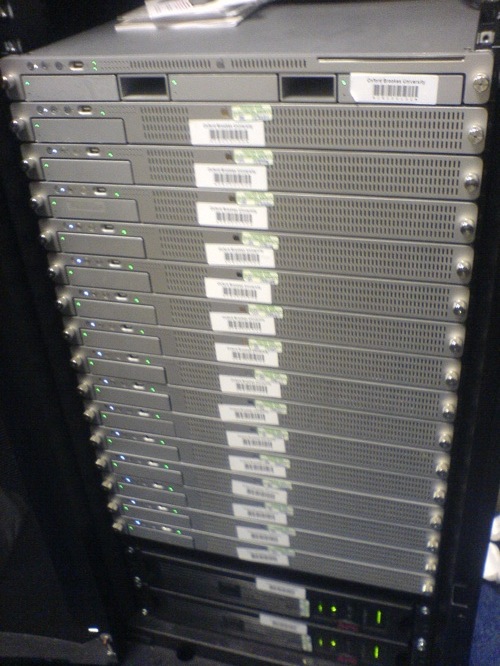 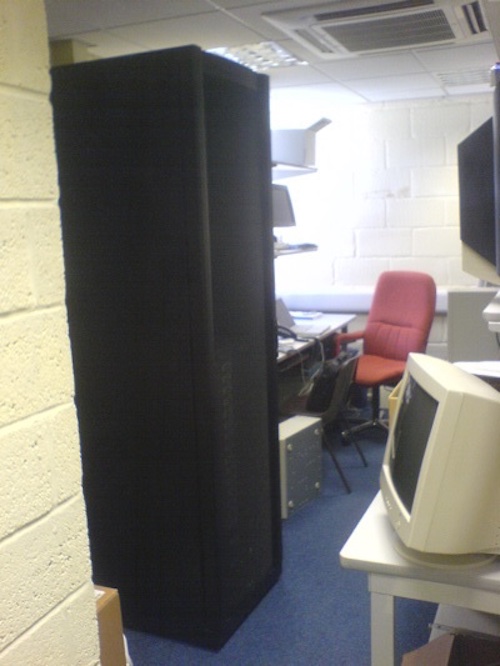 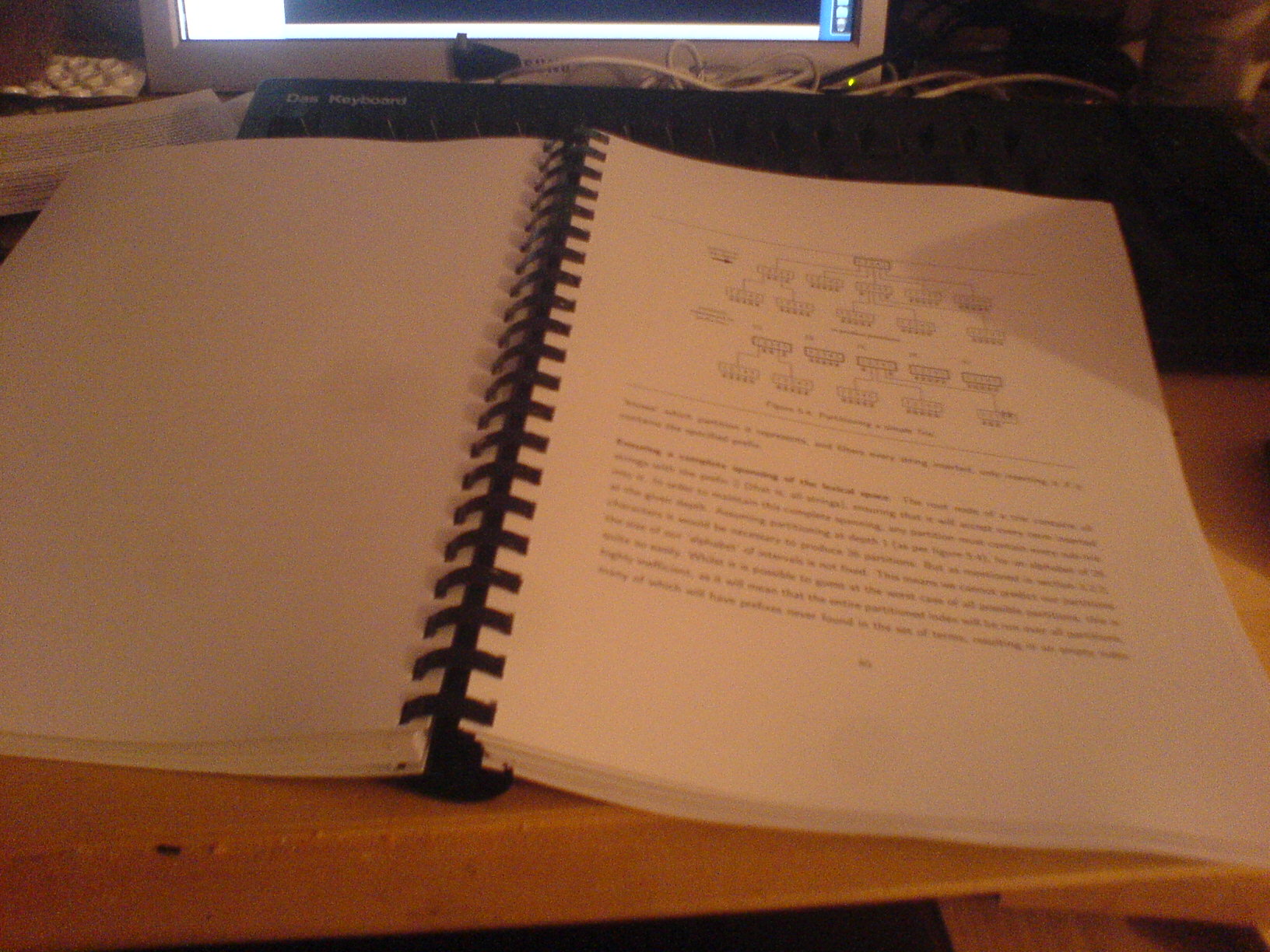 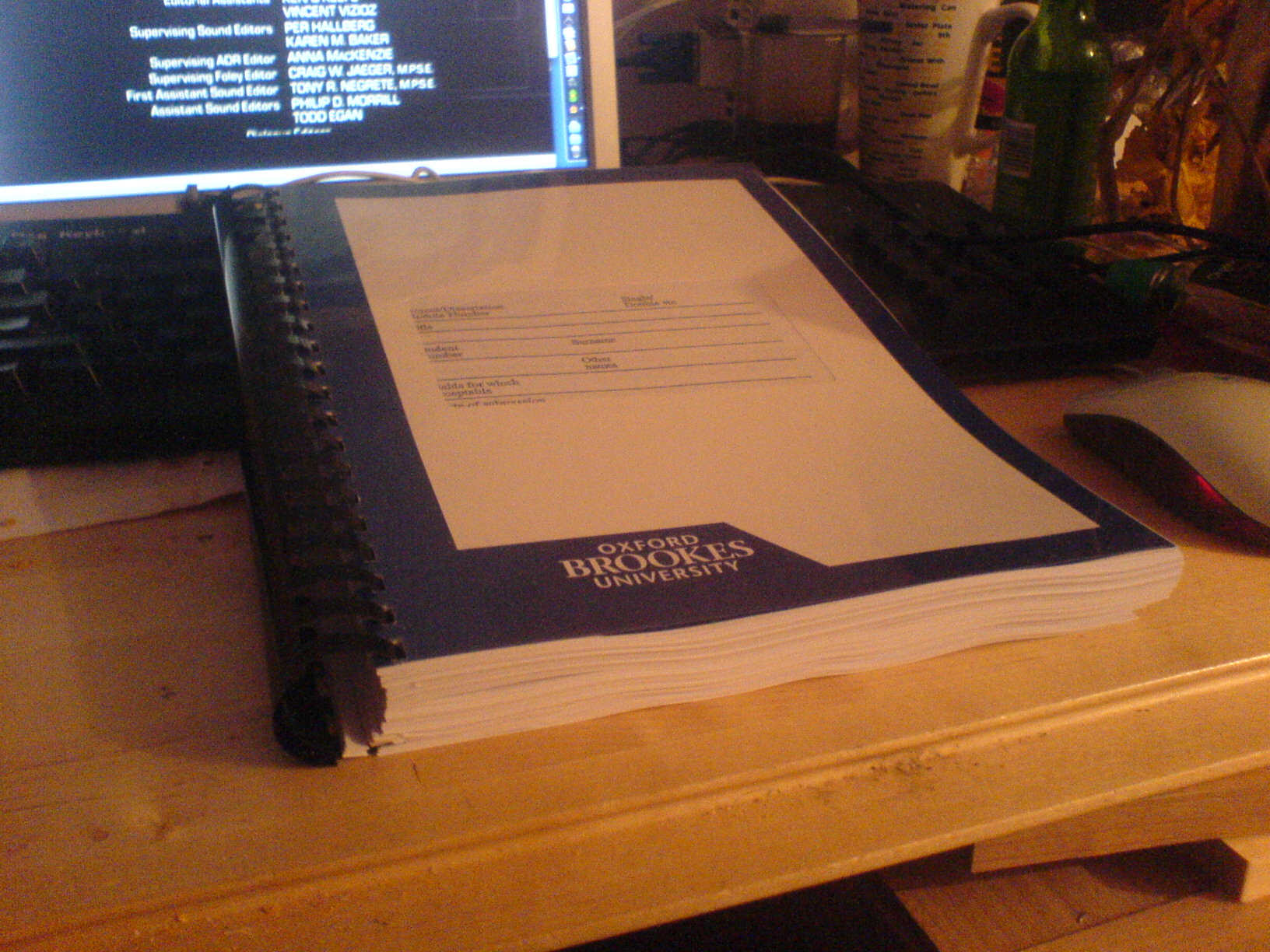 I’ve kept at it because it’s a fascinating subject. But a big part of it is also the people who use FolkTuneFinder. I get about 50,000 page views per month. My inbox shows over a thousand emails over the past few years.

Sorry if I didn’t get back to you, I always love hearing from people and it honestly keeps me going. I don’t dare to think how much money I’ve put into running servers, but hobbies are for fun not profit. Right?

There have been a few incarnations over the years: 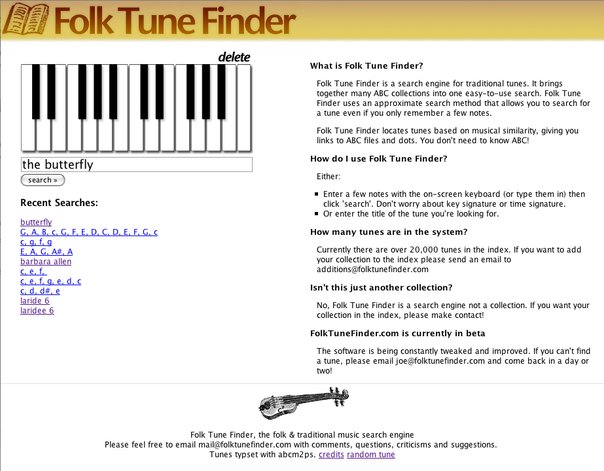 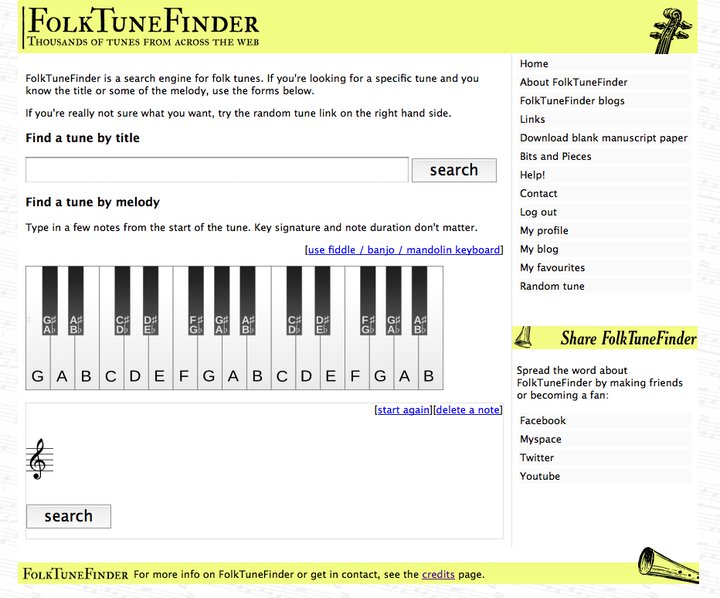 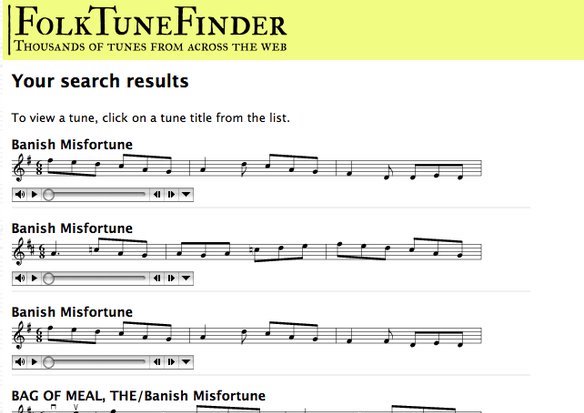 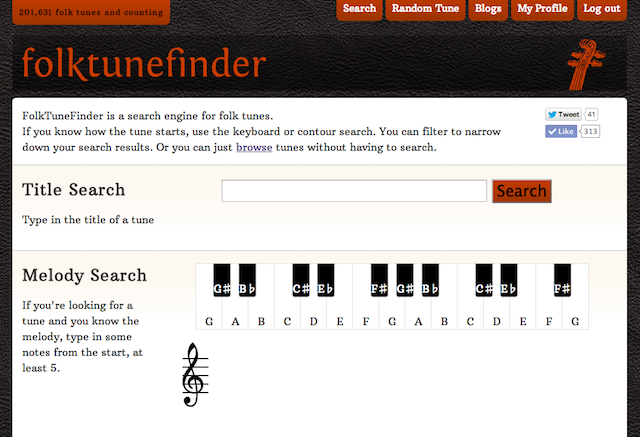 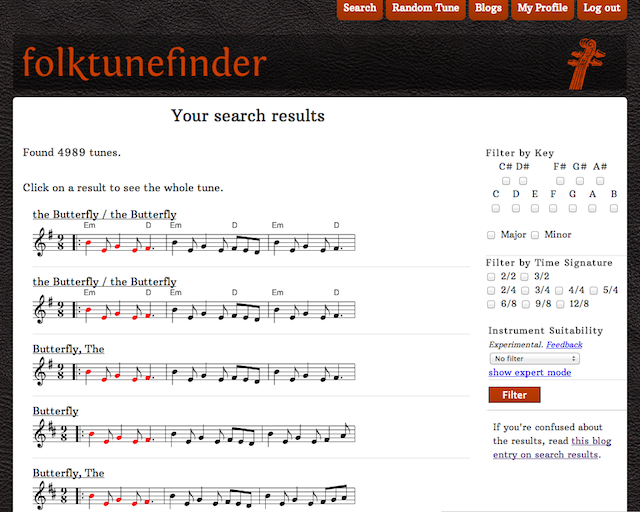 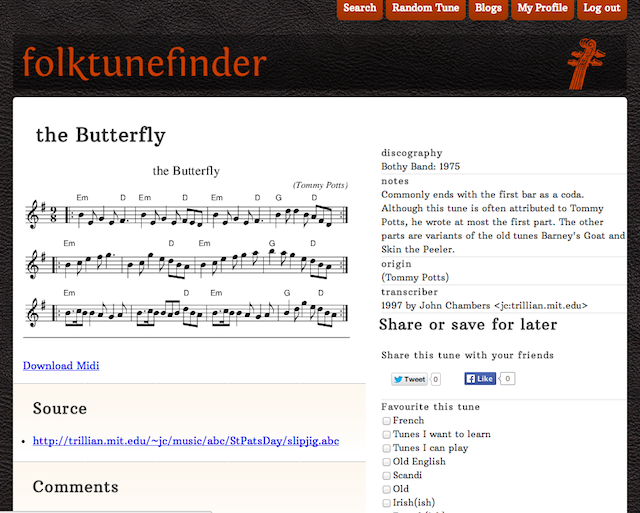 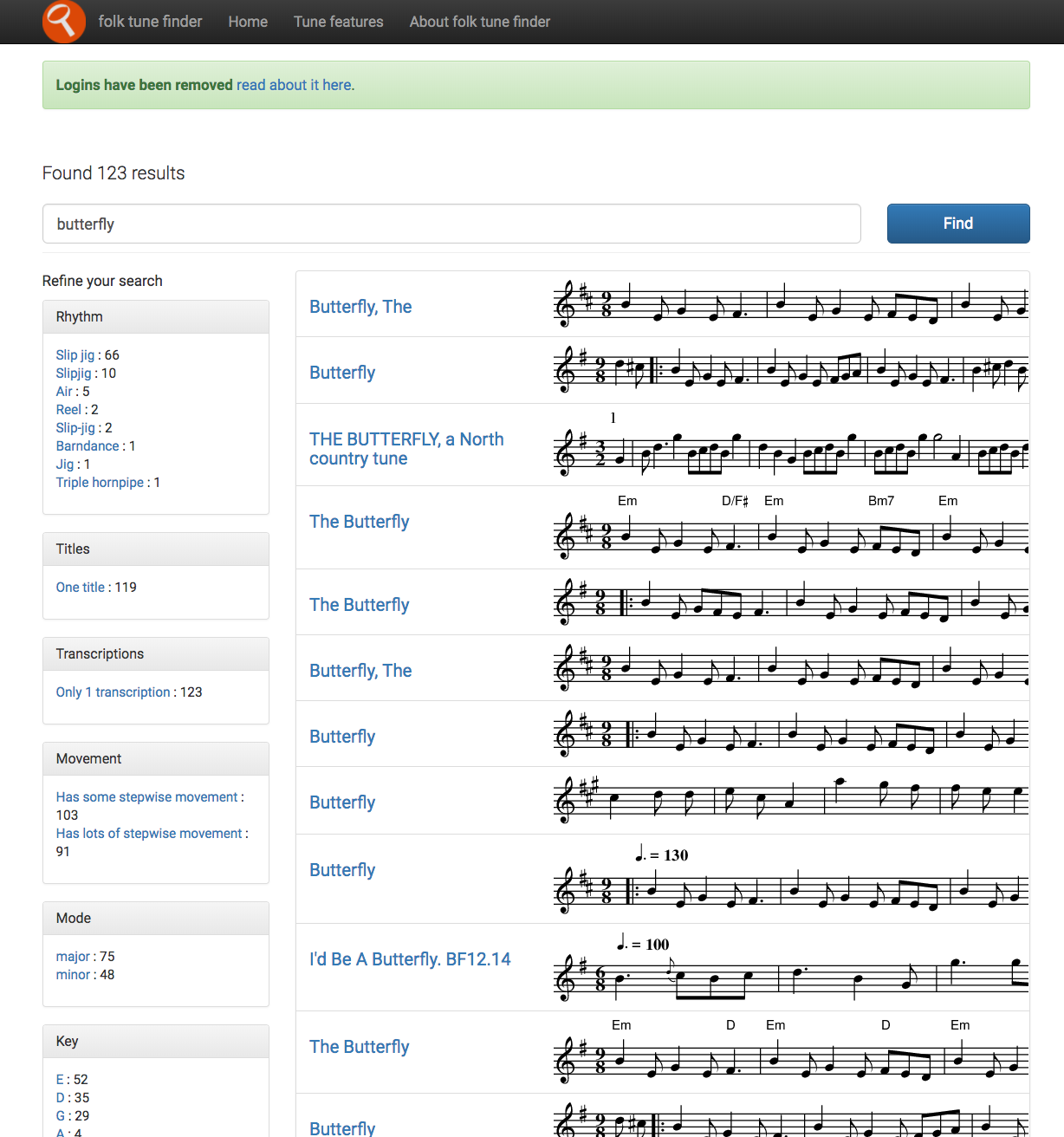 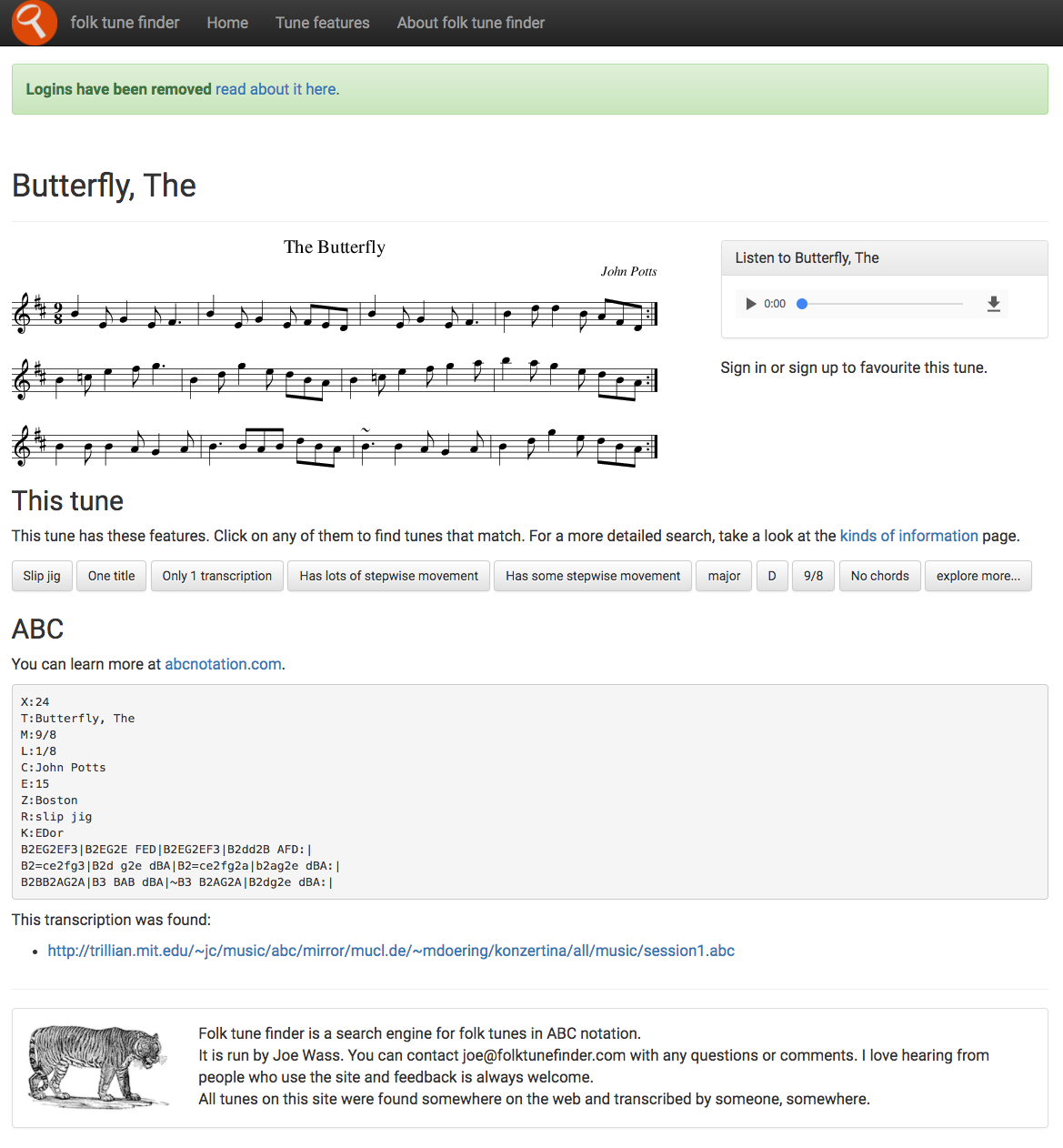 I started Folk Tune Finder as an academic exercise so I read a lot of background literature. The field of Music Information Retrieval is long and broad, and it’s been going a long time before computers (I think the earliest paper I read using computers to search was from the 1960s). But before that we had Parsons Code, a method for indexing melodies and metrical and melodic indexes at the back of a Psalters or Hymnals.

When I started, I was aware of Rainer Typke’s Musipedia, and read his PhD thesis. My approach was slightly different, using sequences rather than Euclidean geometry. These days there’s TunePal which lets you whistle into the microphone to search. Chris Walshaw reprised his abcnotation.com site and now has a solid collection. And The Session is what it always has been, and more so, a brilliant and active community of people sharing and discussing Irish tunes.

A few years ago I added the ability to log into Folk Tune Finder and save your favourites, make comments and upload your own tunes. The favourites and blogs got some traction, but comments never really took off. About a year ago, after a lot of soul-searching, I decided that FolkTuneFinder was going to focus only on search, and to drop the user accounts. I wrote about the (sad but correct) decision on this blog.

The Folk Tune Finder of today is what it started out as: a tool for finding tunes. Not only by melody: there are other bells and whistles such as finding similar tunes, breaking down by time, key, mode, melody shape etc.

Over the years I have felt various emotions like ownership, possessiveness, and sometime defensiveness. I think these are natural things to feel about your pet project, but they aren’t sustainable. A couple of years ago I decided to take the step of showing the ABC on the search results page rather than just linking off to the ABC file where the tune was found. At one point I made some of my search code open source. The current site isn’t, mostly because it’s a bit of a tangled mess.

As I look into the future I see the way forward as openness. Folk Tune Finder has always done two things:

These are actually very different things to focus on. An early message from Jack Campin (a bit of a legend in the ABC world) said something along the lines of “if these sites can’t work together then…”

I can’t quite remember the end of the sentence (or maybe I don’t want to), but I wholly agreed with it, then and now.

Folk Tune Finder was built on the shoulders of people who openly shared music and software. Without open source tools such as ABC2PS, ABC2MIDI and the open ABC Specification (not to mention all of the other tools) Folk Tune Finder would not have been possible.

I’m right at the start of the openness journey. But here’s my manifesto for openness for the next decade:

I will build an ABC tune repository that’s independent to FolkTuneFinder.com. Anyone who runs an ABC site can join up and put their tunes in. I will start it with the tunes already in the Folk Tune Finder index. And anyone can use the corpus to build their own stuff.

Folk Tune Finder will return to its roots and become a search (and research) tool for ABC folk tunes. It will index search this independent repository. All the code and any ABC tools that I create will be made freely available to anyone to build the next generation of music things, or to pitch in and help.

Get in contact if you want to be part of this! Email joe@afandian.com . Or read more about Folk Tune Finder on my blog.